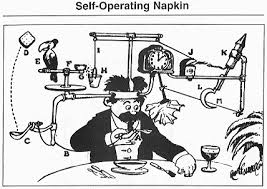 The theory of market failure is a reproach to the free-market economy.  Unless you have perfect competition, perfect information, perfect rationality, and no externalities, you can’t show that individual self-interest leads to social efficiency.*  And this anti-market interpretation is largely apt.  You can’t legitimately infer that markets are socially optimal merely because every market exchange is voluntary.

What we also often see and, depressingly, even usually see, is that economists who are pro-government intervention to fix market failures have a much lower standard for the government than they have for the market. So the odds are that avoiding the specific government policy being proposed would get us closer to the optimum than implementing the government policy.

A case in point is Paul Krugman and his views on the recent $1.9 trillion spending bill. In Benjamin Wallace-Wells, “Larry Summers versus the Stimulus,” March 18, 2021, Wallace-Wells makes that point, although I’m not sure that that’s his intention.

Wallace-Wells, describing a recent debate between Krugman and Larry Summers about the Biden spending plan, writes:

Krugman asked, rhetorically, which elements of the package Summers would cut. Not the public goods, like vaccination and funds for school reopening, and surely not the needed income support. What was left was the part that members of Congress had most vociferously demanded: the aid to state and local governments (which Krugman agreed probably exceeded the fiscal need) and the checks to people who had not much suffered. Krugman said, “The checks, which are the least-justifiable piece in terms of standard economics, are also by far the most popular, and I don’t think we can entirely disregard that.”

Put aside the fact that the funds for school reopening are almost certainly not justified because the risks to students and teachers are so low. Notice what even Krugman admits. First, that the aid to state and local governments is too much, even by his standards. Second, the checks to people who hadn’t suffered much, which are a huge part of the package, are the “least-justifiable piece in terms of standard economics.” And what’s Krugman’s justification for those payments? That they are “by far the most popular” and, for that reason, we can’t “entirely disregard that.”

1. First NFT digital house sells for over 500k. 2. Vitamin D not effective for whites, some Covid effectiveness for blacks with low vitamin D levels. 3. Vitalik on legitimacy. 4. Are the Japanese more risk-averse in their baseball decisions?

Recently, our parent organization, Liberty Fund, embarked on a series of programs aimed at our local (Indianapolis, Indiana) community. The first topic we endeavored to explore was the future of cities.

One of the programs we hosted was a virtual “town hall,” in which I was privileged to interview former EconTalk guest and urban planner Alain Bertaud.

I asked Bertaud what a city like Indianapolis, whose goal is to attract and retain talented young professionals, ought to focus on, as well as why we might not want our city planners to have a “vision” for the future.

Here’s the video of our conversation: